A message from Frances Lochrane.

It is with huge sadness that I have to let you know that Tyrone sadly died on Tuesday 11th May. He was such a lovely man with a great sense of humour and it was a tremendous privilege for us to have helped him ride again after his first stroke. His carer Jerry, and I really believe that being able to ride with us helped him during the dark years following his stroke.

He was certainly testament to “It’s what you can do that counts”. I always have a chuckle recalling his face when I told him he was going to learn dressage. Not something a successful ex flat jockey would ever have contemplated! My goodness what a team he and Ant made in the dressage arena.

Tyrone was one of the 50 faces of RDA for the 50th Anniversary. Watch this lovely video he recorded to mark the occasion.

Registered Charity 1145104
© Lambourn RDA,
All rights reserved. Please do not reproduce images without consent.
Contact Us

Please leave us a message and we’ll get back to you as soon as possible. 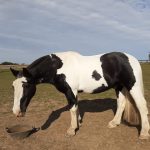